Metal Sniff
Metal Sniff is a great low budget metal band with great lyrics. They write hilarious songs about Jewish antics, sheep sex, Sesame Street, cooking recipes and a penchant for penning songs about someone named Phil. They also do a few tremendous cover songs that include a rousing rendition of the Happy Flowers masterpiece, BB gun. Also an updated, heavier version of Put on a happy face that includes some amazing vocal harmonies that have to be heard to be appreciated. Metal Sniff's main style of music is thrash, with a little death metal vocals and some jazzy interludes as heard in the song Salvino Shuffle which is dedicated to one of the true pioneers of the guitar, Anthony D* Salvino. The world lost a great talent when Metal Sniff stopped making music. Perhaps one day, we will all be blessed with a Metal Sniff reunion tour.

Take the time to listen to this band. They are highly recommended and are not to be missed!

The History Of Metal Sniff:

Some bands claim to be the "world's worst band" in order to make some record sales, but no one has ever earned this title as much as suburban Philadelphia's avant-garde / noise / metal band Metal Sniff. Metal Sniff was formed in 1987 in Melrose Park, PA when lead vocalist Pete Norvaisas bought a cheap guitar at a local record store. Handing the guitar duties to fellow Melrose Park native Matt Walsh, the two jokingly recorded a few songs with a hand-held tape recorder while bored one day. After playing the songs to a few friends, the laughter started piling in as the two accidental musicians were asked to put out a full-length album. Within a matter of weeks, an extremely rough demo was recorded and the two went under the name Metal Sniff. After a few more really bad demos the two went on a short hiatus. But in 1992 Pete bought a 4-track recorder and Metal Sniff was reborn. Their recording of a song from a previous demo made its way to college radio station WLHU in Lock Haven, PA and started climbing the charts. This sudden interest brought Metal Sniff to release it's first full-length demo in 5 years, called "Rumble Strips', this demo quickly made it's way into WLHU's playlist and surprisingly reached the #1 spot. The success continued with their next 2 demos, "Groovalistic Taste Machine" and "Snyphilis". "Snyphilis" was in WLHU's Top 10 for over 4 months!

So, what is there to expect from a band called Metal Sniff? Well, if you haven't guessed, Metal Sniff is not to be taken seriously, in fact, Walsh has never taken a guitar, bass, or drum lesson in his life, which you will soon realize upon hearing. Norvaisas, in breaking the cardinal rule by getting bass lessons, was moved primarily to lead guitar. Metal Sniff's 7th demo is entitled "Blood, Sweat, & Pap Smears. This 19-song demo combines poorly written music along with hilarious and sometimes sick lyrics. Songs include "Psycho Cookie Monster", "I Felt A Gefilte", "Rectum Romper", and "I Sleep With Sheep". Since the release of this demo, Metal Sniff has gone under another hiatus, as one member was in a serious band for a few years and another member moved. In the interim, Metal Sniff re-recorded 2 songs for the HardKnocks Records compilation "Underexposed", as well as recording tracks for tribute albums to The Badlees (an Anti-Tribute) and the Butthole Surfers (which was never released), as well as recording a song for the Napalm Death cover contest -- wonder why we didn't win). In the future, Metal Sniff looks to nauseate the world once again as it plans to write and record it's next demo within the next millenium. One thing you can count on... it's gonna suck.

"If you know [Metal Sniff] please do them both a favor by killing them." - Worm Gear Zine

"A platinum force of harmonic soul!" - The Talon

"Their atrocious musicians - but who cares? It's funny, catchy stuff" - Rockpile

"...these guys, with the right sort of marketing, could be selling millions of copies of this stuff" - Music Ram-blings 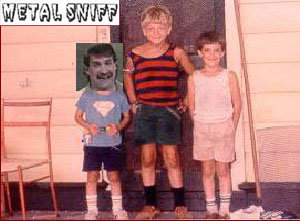